One of the greatest thing about Jazz is how easily and informally musicians can meet and immediately connect to each other in order to give their audience a fresh moment of music filled with surprises and joy. This is during one of these same spontaneous encounters that trombonist Robinson Khoury and guitarist Michael Valeanu met. Robinson is 21 years old and comes from a musical family in the South of France. He perfected his art in prestigious conservatories and performs all over the World. Michael is 31 years old, he comes from Paris and left France for New York City in 2008 to pursue his musical career – nothing in this equation was supposed to bring them together.

But one evening of 2014, at a restaurant in the small city of Vienne in France where Michael was celebrating with food and wine after a concert organized by Robinson’s parents, the young trombonist shows up and takes out his

instrument soon followed by Michael. The music naturally started and the magic happened ! They started playing for a while and the fun they were having started becoming contagious to everyone who was there eating that night – time had stopped and the music kept everybody up until very late that night.

About a year later they had the opportunity to play their first duo show in New York City and kept meeting and collaborating on regular basis ever since. When Robinson and Michael decided to form this duet, they decided that they would bring to their audiences the joy and the freedom that two Jazz musicians feel and communicate wether they meet for the first time or the hundredth.

Robinson Khoury is an eclectic and award-winning young trombonist. Internationally rewarded (1st Prize of the International Trombone Association, category J.J. Johnson, instrumentalist prize in « La Defense », 1st Prize and Prize of the best improvisation at Riga Jazz Stage 2016), he is also very involved in classical music (Master at the National Superior Conservatory of Music and Dance of Lyon in the class of Michel Becquet, Finalist in International Competition in Porcia, Italy). Creator of the Quartet Uptake, Robinson won the contest « Jazz à Vienne », « Jazz (s) Ra, » « A Doua De Jazz » and scoured a number of jazz festivals in France and International through this project (Italy, Spain, Canada). Uptake release his first album in May 2015 (« So Far So Good », « Jazz Village »). He is currently co-leader of « Thibault Gomez Quintet » with which he won the jury and the public awards at Tremplin Jazz d’Avignon 2015. Discovered by Ibrahim Maalouf that year, the young musician has played on great scenes like the Philharmonie de Paris, the Théâtre Antique of Jazz à Vienne or La Pinède of Juan Les Pins. Since the beginning of his musical career, he has already performed alongside great musicians such as Marcus Miller, Lew Soloff, « Blue » Lou Marini, Natacha Atlas, François Moutin, Ari Hoenig, Joel Frahm, Mark Turner, Scott Colley, Clarence Penn, Bart Van Lier, Wycliffe. 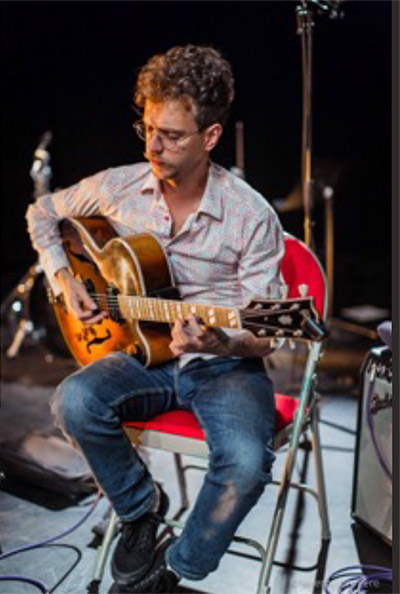 Born in Paris, France in 1985, New York based guitarist and composer Michael Valeanu is one of the most exciting players of his generation. His passion for Jazz and for all the other genres of music he came across while growing up as a musician in France and in the United States has allowed him to create a unique voice on his instrument. In 2008, in order to quench his thirst for music and to learn « Real Jazz » he moved to New York city and attended the New School For Jazz and Contemporary Music. In 2010 he was selected to participate in the Betty Carter Jazz Ahead Program for a two weeks residency at the Kennedy Center in Washington DC. Since then Michael has played in New York Jazz clubs such as Small’s, Jazz Standard, Birdland, Smoke and in clubs and festivals all over the States, as well as in Europe and in Japan. Since 2012 he started an active collaboration with Jazz vocalist Cyrille Aimée with whom he co-produced, her last highly acclaimed two records on Mack Avenue records  » It’s A Good Day  » and  » Let’s Get Lost « . In 2012 Michael released his debut album « Tea Time » and his second album « Hard To Cook » came out in April 2015. He was second runner-up in the 2015 Wes Montgomery International Jazz Guitar Competition.